Last night my TV decided to punish me right in the middle of watching Family Guy, by shutting itself off and refusing to come back on. After replacing the power cord, resetting the surge protector, and a lot of foul language, I finally gave up for the night.Â

After working for a few hours today, I then decided to yank the back off and dig into the issue or at the least blow something up. With my trusty multimeter in hand I was able to quickly trace it down to a blown fuse. Specifically, an 8 amp 250V slow blow ceramic fuse, which I was unable to find around town and had to order from amazon.com.Â

All I can do now is wait and hope that the fuse is the only issue, however, I doubt I am that lucky, after all there is no telling what caused the fuse to blow. I also came across a few articles that this model line has issues with blowing caps and I can only assume that I will have to break out the soldering iron and tackle that too.

Until then, here is nice view of what I have to look at this weekend. 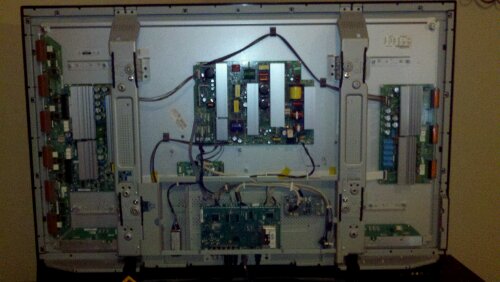